At the February 11, 2020 meeting, City Council approved a resolution naming the new neighborhood park on the corner of N. Kent and E. Cecil Streets Ruth Jackson Memorial Park as recommended by the Winchester Parks and Recreation Advisory Board. Ruth E. P. Jackson was the original owner of Ruth’s Tea Room which was located on the site of the new neighborhood park from 1925 to 2005.

Ruth’s Tea Room opened in 1925 and was managed by Ruth until her death in 1953. Ruth’s husband Boyd, ran the restaurant until he died in 1983, leaving their daughter Vivienne in charge until it closed in 2005. Vivienne was still in high school when she took over for her mother in the kitchen.

“Ruth’s Tea Room was a one-of-a-kind institution operating in Winchester for 80 years,” stated Timothy Youmans, City Planning Director and local historian. “During segregation, the restaurant served people of all races, incomes, and social groups. Race was not a big issue at Ruth’s. It was one of the only places in Winchester that would stay open serving food late into the early morning hours. Parents knew that their children were safe at the restaurant and the owners enforced good manners.” 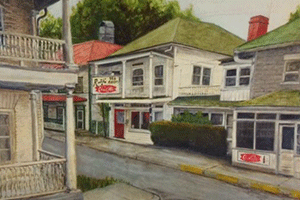 The above illustration (oil painting by Jane Caspar in 1968) is a view of Ruth’s Tea Room and adjoining community store at the corner of E. Cecil Street and S. Kent Street. The buildings which were in poor condition were demolished by a developer in 2008 to make room for new housing. The City and developer swapped properties so the site could one day become a neighborhood park.

A historic marker will be installed at the neighborhood park to tell the story of Ruth and her Tea Room. The park is open to the public.

In 2019, the Winchester Parks and Recreation Advisory Board solicited name suggestions from the community and received over 100 submissions. After careful consideration, the Board voted to recommend “Ruth Jackson Memorial Park” to City Council at their January 27, 2020 meeting. Winchester Parks and Recreation Director Lynn Miller presented a resolution to Council at the January 28, 2020 Work Session which was forwarded to the February 11th meeting for official vote.