In honor of Winchester native, WWI veteran and baseball legend Spottswood Poles, a historical marker will be unveiled and dedicated on Friday, June 14 at 6 pm. The location of the marker is in Jim Barnett Park near the baseball fields and central concession stand (to the left of Bridgeforth Field). Following the dedication, Spottswood will be honored during Spottswood Poles Night at the Winchester Royals baseball game (7 pm in Bridgeforth Field in Jim Barnett Park). The community is invited to participate in the dedication ceremony at 6 pm, meet some of Spottswood’s family (including his nephew Reid Poles), and attend the Royals game to enjoy the sport he loved so much.

Spottswood was also honored in May when an unnamed road in Jim Barnett Park was named Spottswood Poles Drive. The road leads from Bridgeforth Drive to the parking lot near Bridgeforth Field and other baseball fields. 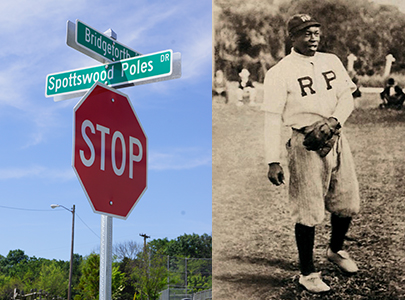 Spottswood was born in Winchester (530 Fremont Street) in 1887. Spottswood began his Negro League baseball career in 1906 as an outfielder with the Harrisburg Giants in Harrisburg, PA, but his first spotlight team was when he moved up to play for the Philadelphia Giants in 1909. In 21 games against Major League pitchers, Spottswood collected 34 hits in 84 at bats for a .405 batting average. During World War I, Spottswood served with the 93rd Division of the 369th Infantry of the U.S. Army (also known as the “Harlem Hell Fighters”). Poles achieved the rank of sergeant during his military career, while also earning five battle stars and a Purple Heart while fighting in France. During a four-year period from 1911-1914, Spottswood was the most dominant hitter in the Negro League. He batted .330, .398, .363 and .429 for the four seasons. Spottswood retired from his baseball playing career in 1923 with a total of 162 stolen bases and a career batting average of .328.  Baseball researcher, Fred Brillhart is quoted saying in the Winchester Star newspaper in 1997: “If you took one part Tony Gwynn (the San Diego Padres multiple batting champion), one part Kenny Lofton (center fielder for the Atlanta Braves), and one part Kirby Puckett, and mixed them together, you’d get Spottswood Poles.” After retirement, Poles spent time in Winchester to start his Taxi service with five cars. After a few years, he took his service to Harlem New York. Later, Spottswood was a manager for the integrated semipro team called the Harrisburg Giants, where he managed his nephew Reid Poles. In the early 1950s, during a tie game, Spottswood inserted himself into the game as a pinch hitter and drove in the game-winning run with a single to right field. Spottswood was in his 60s at the time. On September 12, 1962, Spottswood died of bladder cancer at age 75 and was buried in Arlington National Cemetery.