City Manager Dan Hoffman has selected Deputy Chief Amanda Behan as Winchester’s new and first female Police Chief in the department’s 200-year history. DC Behan has been a dedicated member of the Winchester Police Department for over 20 years, climbing the ranks from recruit in 2001 to Deputy Chief in 2021.

“Amanda has been a part of the Winchester community and police department as a public servant, volunteer, mentor, change agent, role model, and leader. Her skills and qualifications are widely known, and she has my full faith and confidence in this new role of protecting the safety and wellbeing of our officers, staff, and city,” stated Mr. Hoffman.

DC Behan has a master’s degree in Executive Leadership from Liberty University, and throughout her career with the Winchester Police Department, has served many roles. Her accomplishments include implementing officer fitness standards, a significant expansion of community outreach activities, redevelopment of departmental policies, and acquisition of the department’s first therapy canine.

“I am incredibly grateful for this opportunity and want to thank my husband, children, and everyone who has supported me throughout this journey,” DC Behan said. “It is my passion for our community and the men and women who protect and serve it that give me this great honor to lead the Winchester Police Department. I will have an outstanding team and look forward to our future together.”

The Police Chief vacancy was created when Chief John Piper was promoted to Deputy City Manager, overseeing all public safety divisions, in a recent administrative reorganization. DC Behan’s swearing-in ceremony will occur on October 21 at 2 pm during the Department’s scheduled promotion ceremony at the Jim Barnett Park Rec Center. 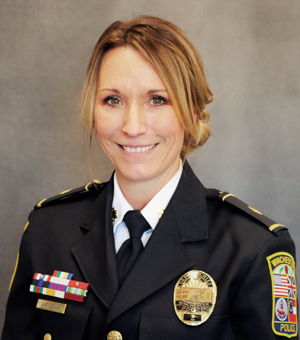