“It’s been amazing to go through the process of putting together an event of this magnitude from the ground up,” said Main Street Program Manager Alex Flanigan. “Everyone who is working on this project is doing so out of a real passion for something at the heart of it. We have volunteers who are big fans of this music, Virginia craft bourbon, and Old Town Winchester! It’s going to be an exciting time for the community, and I am so thrilled about the artists we are bringing to town.”

The 2022 FIDDLES & FIFTHS will take place Friday, August 26 and Saturday, August 27 in Old Town Winchester. All main stage performances are free to the public. Other additions to the festival will include food and drink specials, a cocktail competition, jam session, and local street performers. For performance schedules and more information on the festival, go to www.enjoyotw.com. For sponsorship information or VIP packages, contact the Old Town Winchester office at otw@winchesterva.gov.

The Ebony Hillbillies started out as an NYC street corner phenomenon, but their vibe and influence has extended over the years to acclaimed live performances at legendary venues like Carnegie Hall and Lincoln Center; appearances on the BBC, Good Morning America, NBC, CBS, etc.; international music workshops and festivals; visual artist collaborations at museums (including The Whitney with phenom Kara Walker and The Smithsonian Museum); guest school programs; foot stomping and hand-clapping dance parties; and more. While formed in the digital era, they have sold thousands of hard copies of their four CDs - Sabrina’s Holiday (2004), I Thought You Knew (2005), Barefoot and Flying (2005), and Slappin’ A Rabbit – Live! (2015) – at their shows and via their globally popular website. The Ebony Hillbillies are currently in the studio working on their next project.

For over two decades, Railroad Earth has captivated audiences with gleefully unpredictable live shows and eloquent and elevated studio output. The group introduced its signature sound on 2001’s The Black Bear Sessions. Between selling out hallowed venues such as Red Rocks Amphitheatre in Morrison, CO, they’ve launched the longstanding annual Hangtown Music Festival in Placerville, CA, and Hillberry: The Harvest Moon Festival in Ozark, AR—both running for a decade-plus. Sought after by legends, the John Denver Estate tapped them to put lyrics penned by the late John Denver to music on the 2019 vinyl EP, Railroad Earth: The John Denver Letters. Beyond tallying tens of millions of streams, the collective have earned widespread critical acclaim from David Fricke of Rolling Stone, American Songwriter, Glide Magazine, and NPR who assured, “Well-versed in rambling around, as you might expect from a band named after a Jack Kerouac poem, the New Jersey-built jam-grass engine Railroad Earth has let no moss grow under its rustic wheels.” The celebrated New Jersey septet — Todd Sheaffer [lead vocals, acoustic guitar], Tim Carbone [violins, electric guitar, vocals], John Skehan [mandolin, bouzouki, piano, vocals], Carey Harmon [drums, percussion, vocals], Andrew Altman [upright & electric bass], Matt Slocum (organ and piano), and Mike Robinson (banjo, guitar, steel) chronicle the twists and turns of this journey through eloquent songcraft, bluegrass soul, and rock ‘n’ roll spirit on their newest album, All For the Song. 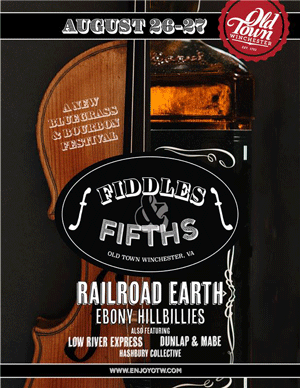