The 25-acre Abrams Creek Wetlands Preserve in Winchester, VA is a calcareous muck fen and home to over 300 plant species and 180 kinds of birds. Twenty of the Preserve’s plant species appear on Virginia’s Rare Plants List, including two species found nowhere else in the Commonwealth. In addition, no other limestone-floored wetland in Virginia has as many rare plants as Winchester’s wetlands. The Abrams Creek Wetlands are diverse. It includes marshes, which are sunny and covered by grasses and wildflowers, and swamps which are shady and filled with trees and shrubs. The Preserve’s significant plants live in the sun-filled marshes.

Calcareous muck fens take 10,000 years to form naturally and like other wetlands, they capture pollutants, keeping them out of drinking water. Because of their limestone bedrock, low acidity, and high nutrient levels, calcareous fens are one of the rarest natural communities in the U.S. Mineral-rich groundwater and a sun-filled habitat allow distinct species of plants to thrive.

Ready to visit the Preserve and learn more? Click here to take the audio tour.

Click the image below to enlarge the map (PDF). 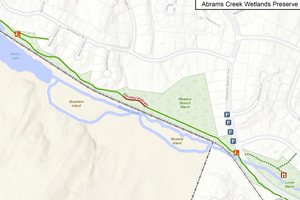 #1: Aerial View of the Wetlands

Since 1999, the City of Winchester, with assistance from Shenandoah University’s Environmental Studies Program, has worked hard to conserve the city’s unique and beautiful Abrams Creek Wetlands Preserve. In 2019, the Winchester-Clarke Garden Club joined the partnership with a significant contribution. Several activities will be conducted this fall to honor and maintain these important wetlands and the community is invited to participate.

The City recognizes the importance of the Abrams Creek Wetlands Preserve and is committed to preserving it in its natural condition. Grazing animals, such as bison and elk, and periodic fires formerly kept the marshes open to the sun. Since these activities no longer occur, the City must take on the natural roles of fire and grazing animals in preventing shade-producing trees from taking over the marshes. Winchester Parks and Recreation (WPRD) staff maintain the Preserve according to the property’s Management Plan (2007). As part of this plan, WPRD staff regularly cut trees and shrubs, especially species that are invasive, and will conduct this activity again this fall (2019). In addition, the Winchester-Clarke Garden Club (WCGC) will assist in the 2019 cutting and is contributing $39,000 in grants and donations to help the effort and bring more attention to the Preserve:

The GCA Founders Fund Award was a national competition and members of all affiliated U.S. garden clubs were involved in the voting. The Garden Club of Virginia award was a state-wide competition and the Bessie Bocock Carter Conservation Award was the first-place award.

Since the Preserve is a bird sanctuary, the cutting must take place between mid-August to mid-October and March 1-April 1.

Community Events at the Preserve

Events to enjoy and learn more about the animals and plants that call the Preserve home! Contact Winchester Parks & Recreation at 540-662-4946 for information.

The City of Winchester dedicated the Preserve and the first mile of the Green Circle Trail in October 2003. The Preserve is the City's first formally protected natural area. Prior to that, Shenandoah University Environmental Studies (SU-ES) students had studied these wetlands since 1997 and led a public field trip there in 1998 - a year before the pathway was built, and 5 years before the Preserve was established. Nearly 100 people attended.