“This is a professional police department, and that is evident not only by our state accreditation, but by the work that our men and women do every day out on the street to keep our community safe," he said. "We are accountable. We are accountable to the community we serve and to each other. We believe in and are engaged with our community.”

While lunch was served, a slideshow of photos dating back to the early 1900s was presented.  A historical display of information, equipment, and uniforms was placed around the room while attendees reminisced and learned more about the Department.

The WPD was formed on March 12, 1822 when Council established the position of Superintendent of Police which held responsibilities that included keeping general law and order, removing trash from the street, and regulating speed by people on horses. It wasn’t until the 1910s that the Department had its first vehicle, a motorcycle, and in the 1920s officers were issued flashlights to replace lanterns.  The first two-way radio system was introduced in 1940. The first female and first Black male officer were hired in the 1970s, and it wasn’t until 1980 that officers were issued ballistic vests. Shortly after in 1983, the WPD formed its first SWAT Team.

Lt. Joshua Spishak led the 200th anniversary committee, and he is pleased to announce additional projects and events that will be held to mark the bicentennial celebration. On May 28, 2022, the WPD will host a car show in Old Town Winchester and will release further information next month. The Department also had a challenge coin and bicentennial badge designed which may be worn by officers through the end of 2022. A 200thanniversary WPD yearbook is in development. 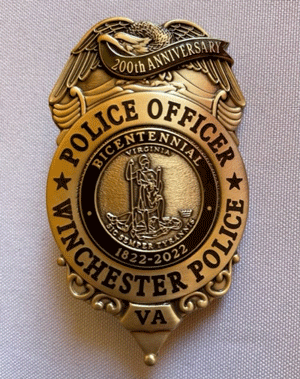